“Music as a beneficent obsession, vital and absolutely essential.
Music as only and irrevocable choice”

Michele Bonivento goes to the heart of music and lets himself be devoured by it, he penetrates it and he assimilates it within himself.
Through the years he had the chance to test himself by playing with the fondest musicians and disparate music languages, and finally gospel and blues chose him.
The encounters, the tours and the collaborations with afro-american artists made him become a vibrating and caring interpreter.
He began his studies at the Music School Benedetto Marcello in Venice; then he continued at the C.P.M. in Milan where he got the diploma in 1995 under the guidance of Master Franco d’Andrea (for piano jazz) and Massimo Colombo (for keyboards).
Since then his skills matured by working with artists like Cheryl Porter, The Gospel Train, In The Spirit, David Massey, Kay Foster Jackson, Wendy D. Lewis, Herbie Goins, Vincent W. Williams, Darrell Hill, Glen White, James Thompson, Barbara Evans, John Henry Blues, Joice Yule, Andy J. Forest, Larry Ray, Elliot Murphy, Ashley Davis, Edsel Davis, Will Roberson, Kimberly Dovington, Carl Verheyen.
He had concerts in England, Spain, Germany, Switzerland, Austria, Slovenia, Croatia, Poland, Hungary and USA participating in the most important festivals including Pistoia Blues, Trasimeno Blues Festival, Montreaux Jazz Festival. In Chicago (the real “Mecca” of Gospel and Blues) he played in the main churches and recorded the cd “Live in Chicago” with the International Gospel Messangers.
Different experiences with african musicians like Abdou ‘Jaetz’ N’Diaje (bass player of Youssou N’Dour), Moulaje Niang, Badara Seck (Senegal), Jamal Ouassini (Morocco) brought him deep down inside the inexhaustible african music world.
Michele Bonivento is both a musician of delicate emotions and edgy blues-funk sonorities, intense- feeling piano-player and organist of mighty rhythmics. 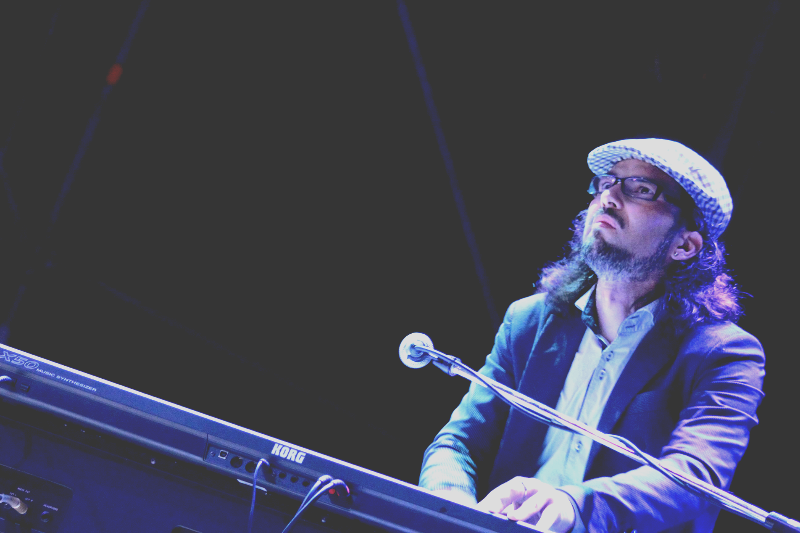